You think you’ve wiped your device, but photos keep clogging your iPhone’s storage. This is what may be happening.

“Other” can be a four-letter word of doom to iPhone and iPad users. Those who can’t install software patches on their devices with maxed-out storage blame that amorphous foe.

In that context, “Other” – to see it, open the Settings app, choose General and then either “iPhone Storage” or “iPad Storage” – functions as a catch-all villain.

Apple defines it as “caches, logs and other resources currently in use by the system.” In practice it often becomes a barrier to installing such patches as the two security fixes Apple shipped in March.

“In theory it should manage itself, but as we both know, it doesn’t do a great job,” emailed Josh Centers, managing editor of the longtime Apple newsletter Tidbits and author of the book “Take Control of iOS 14 and iPadOS 14.”

Incredibly light, agile and portable: Small laptops are hitting above their weight class

More: What an upcoming Apple privacy prompt will mean for you – and the apps you use

On an iPhone SE and an iPad mini 5, each with 64 GB of storage, “Other” took up more room than Apple’s system files: just under 7 GB for System on each device, around 8 GB for Other. (Except for when the iPad briefly showed Other topping 29 GB.)

Those totals dwarf any one app, although if only a gigabyte stands in the way of a patch addressing an “actively exploited” vulnerability, you’ll do better using Apple’s option to offload an app while keeping its data and settings. To use that, tap an app’s item in the storage list and select “Offload App.”

Some apps also let you delete specific files within that interface. For example, Apple’s Podcasts app’s entry in the storage list includes shortcuts to erase every episode of a podcast. 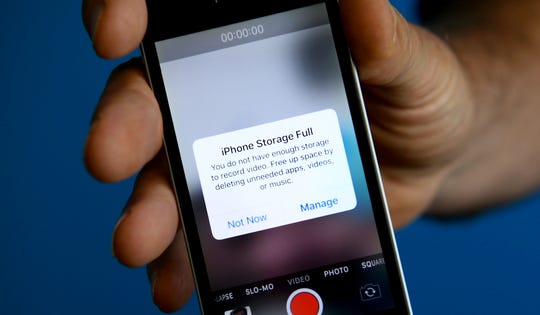 There’s not, however, any way to delete caches of individual apps as you can in Android’s Settings app or to dump temporary files all at once as you can with Google’s Files app.

To clear out Other all at once – which may be more necessary on an older iPhone or iPad with little storage to spare – you’ll need to back up and restore your device. Moving all of your data off the phone or tablet, erasing it and then moving it back zeroes out Other, if only temporarily.

Your two options are via Apple’s iCloud service or a Mac or PC, each of which backs up almost everything except your Apple Pay settings and Face ID or Touch ID biometrics. The 5 GB of free storage you get with an iCloud account, however, won’t suffice here, and paying for more – 50 GB for 99 cents a month should fit most people in this scenario – to fix an Apple-created problem may offend on principle alone.

A computer backup and restore, however, is a little fussier. You have to turn off Find My on the device, then set a password on the backup for it to include saved passwords and other sensitive data. And while a Mac includes the necessary software – the Finder in current macOS releases, iTunes in older ones–on Windows you’ll need to add iTunes via a quick install from Microsoft’s Windows Store.

Performing a backup and restore via iTunes for Windows cleared up 4+ GB of Other on a 16 GB iPad Air 2. And then that accumulation reappeared a day later, ensuring that this chore will need to be repeated for future updates.

Centers offered the equivalent of a shrug about this situation.

“Personally, I just ignore it and manage space where I actually can, chalking ‘Other’ up as a cost of doing business,” said Centers. “Obsessing over it will just drive you insane.”

Rob Pegoraro is a tech writer based out of Washington, D.C. To submit a tech question, email Rob at rob@robpegoraro.com. Follow him on Twitter @robpegoraro.

The views and opinions expressed in this column are the author’s and do not necessarily reflect those of USA TODAY.

Palantir Technologies Inc. reported a loss for the fourth quarter, and the data-mining company signaled Tuesday that sales could grow at a slower pace. The shares of Palantir closed 13% lower at $27.84 following the […]

Buy This NFT Column on the Blockchain!

Why can’t a journalist join the NFT party, too? Source link Tech

Any cookies that may not be particularly necessary for the website to function and is used specifically to collect user personal data via analytics, ads, other embedded contents are termed as non-necessary cookies. It is mandatory to procure user consent prior to running these cookies on your website.